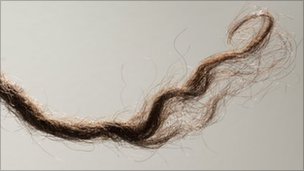 A lock of hair has helped scientists to piece together the genome of Australian Aborigines and rewrite the history of human dispersal around the world.

DNA from the hair demonstrates that indigenous Aboriginal Australians were the first to separate from other modern humans, around 70,000 years ago.

This challenges current theories of a single phase of dispersal from Africa.

An international team of researchers published their findings in the journal Science.

While the Aboriginal populations were trailblazing across Asia and into Australia, the remaining humans stayed around North Africa and the Middle East until 24,000 years ago.

Only then did they spread out and colonise Europe and Asia, but the indigenous Aborigines had been established in Australia for 25,000 years.

Australian Aborigines therefore have a longer claim to the land in which they now live than any other population known.

The research also highlights the exciting future possibilities of comparing the genomes of multiple individuals to track migration of small indigenous groups.


Archaeological remains are known from Australia from around 50,000 years ago, putting a maximum age of the Aborigines' settlement there.

But the history of their journey and their relationship with the indigenous people of Asia and Europe had not been solved.

It was previously thought that modern humans dispersed in one pulse out of Africa and the Middle East, and because of the distances involved, the modern Europeans would have separated from the Asians and Australians first.

Genetic information from a lock of Aboriginal hair has been used to show that the Australians set off a lot earlier.

By looking at the tiny (fraction of a percent) differences between the DNA of Aborigines and other ancient humans, the scientists show that the indigenous Australians were first isolated 70,000 years ago.

Dr Francois Balloux, of Imperial College London described how a "population expanded along the coastline because of the rich resources available there. They could walk almost the entire way because the sea level was much lower". Just one small sea crossing would be required to reach Australia.

Any potential archaeological remains of this journey, which lasted 25,000 years, would be lost to the deep sea under rising sea levels.

The remaining populations in the Middle East moved out to colonise Europe and Asia 24,000 years ago, and the aboriginal genome records some interbreeding between Asian populations and aboriginal ancestors at this time.

Discovering the history of human migration with DNA has been made possible by improvements in the techniques used to study the genome.

Traditionally, genetic divergence dates were arrived at by combining the number of unique mutations in the DNA with an assumed rate of acquiring those mutations.

Now, computationally powerful models can simulate lots of different scenarios for migration timings and directions, and researchers can compare and choose the situation that most closely matches what is seen in the genome.

By comparing the Aboriginal genome with the DNA of African, European and Han Chinese individuals it was possible to highlight the later interbreeding after initial colonisation. 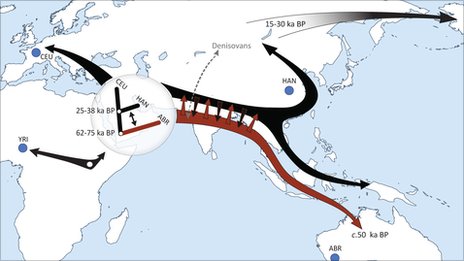 Australia was the first place to be colonised; Eurasians remained in the Middle East until 24,000 years ago.

Comparison with Eurasian populations show that the Australian Aborigines have a similar percentage of Neanderthal genes within their DNA as their Eurasian counterparts, suggesting that any interbreeding occurred before the Aborigines embarked on their colonising journey.

The findings of these researchers are supported by an independent study, published this week in the American Journal of Human Genetics, which looks at the characteristic DNA from an extinct, archaic form of human, the Denisovans.

Denisovans lived over 30,000 years ago, and contributed genes mostly to present-day New Guineans.

This independent study identifies a pattern of Denisovan DNA in Asian individuals that can only be explained by two separate waves of human migration: the first of Aboriginals colonising Australia, and the second involving the occupation of Asia itself.


The Aboriginal research was carried out on a single lock of hair, which was donated by a young Aboriginal man to the British anthropologist Dr A C Haddon in 1923.

"At this time, it was fashionable to take human samples," said Dr Balloux. The collection of hair was one of the more innocuous efforts of anthropologists at the time.

The researchers chose to examine the hair, as opposed to any other type of remains, for legal reasons. Hair is not classified as a human tissue.

"More important to us was that the research would be acceptable from a social and moral point of view" said Dr Balloux.To the surprise of the scientists, the people they consulted were very supportive of the study and its results. Dr Balloux explained that in the past, indigenous people have been "extremely sensitive of the motivations of western scientists".

The research has been published with "strong endorsement" from the Goldfields Land and Sea Council, the organisation that represents the Aboriginal traditional owners of Western Australia, he said.

Genomics techniques like those used in this study have the potential to be used more extensively in the study of human migrations and the evolution of health and disease.

The international team next plans to look in more detail at the dispersal of modern humans out of Africa, as well as solving how and when the Americas were colonised.

Dr Balloux said he was excited about the unexpected potential of the techniques, describing it as "borderline Jurassic Park science".

More on This Story